We came, we saw, we conquered – should be the motto of the Puma Cup. In our supportive way the Ford Racing UK Puma Cup car contributed to the record breaking grid turnout of 11 cars. The BRSCC run event went smoothly and the Puma Cup cars ran alongside the XR Challenge.

2016 has been a learning curve in Puma Cup and the improving pace of car 132 was and is due to Ian Scruton who fettled and on many occasions drove the car for Ford Racing UK. We have been very pleased to have had some guest drivers out. GT racer James Holder came out at the first Oulton Park races (in May) and then drives by Motorsport News race editor Rob Ladbrook and Hamish Brandon at Donington saw the car put through its paces. The other rounds saw our development/regular driver Ian Scruton share some endurance drives with Mike Hooper. Our Puma race car has been reliable and resilient which is perhaps no surprise for those who have been racing for a couple of seasons. The great aspect is the readily availability of cars and spares that are out in the market place. 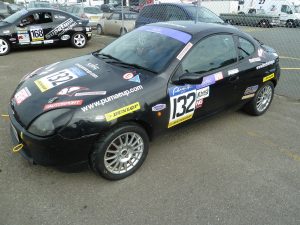 The approaching 2017 has given us food for thought as we now have several sets of drivers wishing to compete with us. Do we build one or two additional cars to keep up with demand? We have two donor cars ready to convert and work will start on the first of these in a couple of weeks.

Our next event is to support Lydden Hill race circuit with a publicity day at the circuit on 5th November. Hopefully no fireworks on track? We have some interested drivers coming along to sample the race car.